The threat of de-registration at Blackbushe Airport:

You will be aware of an application by Blackbushe Airport for that part of the Common on which the Airport is situated to be deregistered as common land. If this application were to succeed it would set a precedent which would jeopardise the future not only of that section but the whole of Yateley Common and indeed all common land in the United Kingdom.

At one time the Yateley Society would have been at the forefront of such a campaign, but we currently do not have members with the knowledge and expertise to be actively involved, nor do we have sufficient funds to take legal advice alone. However, the Society has donated £2000 to the Open Spaces Society to support them in employing legal representation, in opposition, at the public enquiry.

The Open Spaces Society was founded in 1865 as the Commons Preservation Society. Over the last century the society has preserved commons for the enjoyment of the public. It has also been active in protecting the historical and vital rights-of-way network through England and Wales. Their principal work includes helping their members protect their local common land, town and village greens, open spaces and public paths, and answering their queries.

If any you wish to make additional donations in a personal capacity you can do so by following this link to the Open Spaces Society website: https://www.oss.org.uk/how-you-can-help/appeals/

Read more about the Inquiry:  https://www.blackbusheairport.co.uk/public-inquiry

Attend the Inquiry – Show you care ! 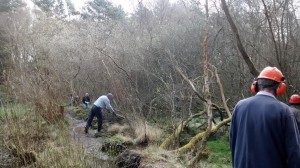 The tasks the conservation group undertakes under the supervision of the Rangers include cutting down scrub to prevent it over growing and forcing out the heather, repairing paths and steps, and helping to keep the ponds clear of invasive weed. Some larger trees and shrubs are left, and no cutting is done during the bird nesting season.

But why is the conservation work important for Yateley Common?
Most lowland heathland developed during or after the Stone Age (some 3,500 years ago) in areas with poor acidic soils, where trees were removed and grazing or burning prevented their re-growth.  Lowland heathlands are mostly man-made and therefore tend to revert to woodland and scrub without active management. All the plants and animals that have specialised and adapted to the open heathland over thousands of years are threatened if their habitats become shaded and overgrown. Examples are

which often live only in these areas.  These are the reasons why most lowland heathlands are designated Sites or Areas of Special Scientific Interest (SSSIs/ASSIs) under the Wildlife and Countryside Act 1981.

In the UK it is estimated that only about one sixth (16%) of the heathland present in 1800 remains today. That is similar to an area the size of Cornwall shrinking to the equivalent of the Isle of Wight. The loss has speeded up in recent decades.

The ecology and natural history of Yateley is nationally important. To the south we have the National Nature Reserve at Castle Bottom and the scarce lowland heath of Yateley Common, which is a Site of Specific Scientific Interest (SSSI) and Special Protection Area (SPA).  It is also home to protected species such as the Woodlark, Nightjar, Dartford warbler, Nightingale, Stonechat as well as rare plants and insects. To the north we have the Moor Green Nature Reserve created from gravel workings in the Blackwater Valley. This has diverse habitats for its resident breeding population and is especially important for winter visiting water birds – widgeon, gadwall, shoveller, egret, goosander, pochard. There are also nationally recognised sports fishing lakes.

The Yateley Society is represented on the  Commons Management Committee and helps practically, through promoting and contributing to regular voluntary conservation work supporting the Hampshire and Blackwater Valley Rangers. Our Conservation Group meets on the last Sunday of every month in Wyndhams Pool car park (off Cricket Hill) at 10am.  Everybody is welcome to join in, but under 16s must be accompanied by an adult.

The group works closely with the Yateley Rangers and is typically involved in restoring heathland by clearing scrub from the Common but when opportunities arise it has undertaken projects, for example, haymaking by hand in a privately owned wet meadow rich with orchids and other rare plants, and boardwalk assembly and a Big Lottery grant application to build a pond-dipping platform.

to secure the enhancement of the biological diversity of the ecosystems, the conservation of the natural and semi-natural habitats, and the protection of the characteristic fauna and flora within the area of benefit

Conservation Group
We meet every 4th Sunday in the month at Wyndhams Pool car park.

The conservation group working party linked to the society meets for 3 hours at 10.00am on the last Sunday of every month at Wyndham’s pond car park (you’ll find the car park on the left hand side coming up Cricket Hill, about 100m past the Cricketers pub).

The group helps the Yateley Common Rangers with a wide variety of jobs that are required to maintain the rare lowland heath that makes up the common. You don’t have to be a member of The Yateley Society to join the conservation group – just come along and join in. It is a great way to get some fresh air and exercise.